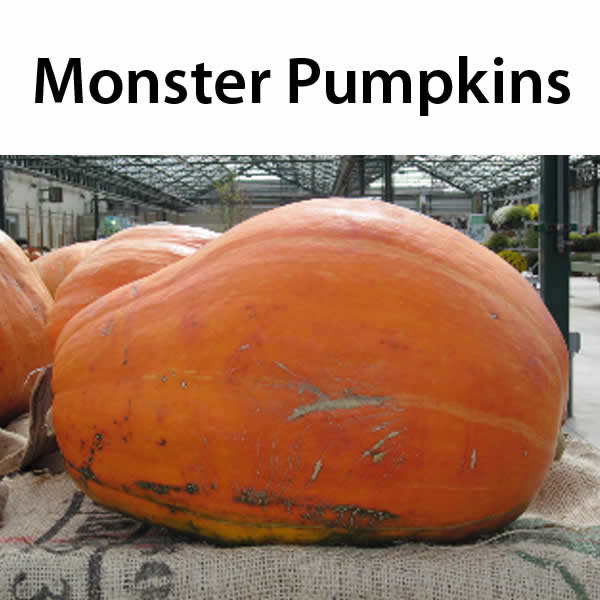 With the new fall season, I always look at the garden with some trepidation—whether it is the mountainous drifts of shifting leaves that need to be raked or the ghostly-looking mushrooms that spring up overnight in the dew-laden soil.  With Halloween just around the corner and winter breathing down my neck, the garden can become a pretty scary place as the winds turn cold and sweet children become bloodsucking vampires in the blink of an eye. A garden paradise starts to reveal its dark side when plants disguise themselves as snakes and mutant gourds reign.

What’s lurking in your garden?

Orange monsters
Did you know that the huge, Monster Pumpkins can grow to up to 30 pounds a day? The world record monster pumpkin weighed in last year at 2,032 pounds! If you want to grow these mutants next year, the plants need plenty of room to spread (as much as 1200 square feet) and lots of water! Come see them in our outdoor greenhouse—if your dare.

DIY Halloween containers
Hollow out orange and ghost-white pumpkins and fill empty pumpkins with potting soil. Dig in black and orange pansies to make a wicked Halloween container for those cool October days. The perky sentinels will be a gardener’s protection from the witches and skeletons that will be crossing your garden path.

Watch your back!
The Cobra Plant, Cobra Lily or California Pitcher plant (Darlingtonia californica) is a master of deception. It tries to confuse its prey by masquerading as a striking, cobra snake—complete with a forked leaf that resembles red fangs. This carnivorous plant lures insects into its transparent cavities where they are captured and become tasty snacks. Although this plant is rare and only lurks in Northern California bogs, you can’t be too careful!

Sweet, yet deadly
Although innocent in appearance, the sweetly-scented, Lily of the Valley (Convallaria majalis) is bad to the bone. The deadly, red berries that emerge in the fall are especially attractive to small children because of their bright color and sweetness. If any part of this plant is ingested, it can cause varying degrees of gastrointestinal problems, irregular or slowed heartbeat, blurred vision and other maladies. The sweet, white flowers emerge in early spring while the plant multiplies into an unstoppable army that will conquer your garden.

What’s the buzz? The sound of summer. Filling your garden with flowering plants that bees like is the perfect way to a part of the cycle of nature. Bees are hardworking insects—pollinating our crops and flowers for us and feeding themselves and their community at the same time. And, don’t forget the honey—one of nature’s simplest pleasures.