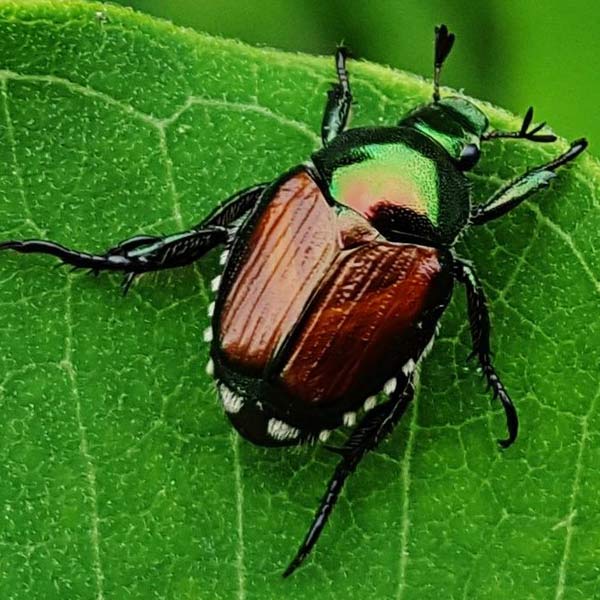 The Japanese beetle is a non-native insect that has become a serious problem for many gardeners. An adult beetle will feed on several hundred varieties of trees, shrubs, vegetables and roses; grubs will feed voraciously on grass roots. Japanese beetles leave behind stripped leaves, with nothing left but the veined webbing of the leaves. If you see brown, dead spots on the lawn, the grubs have been hard at work, eating grass roots until they are dead. Sometimes, you can lift up a corner of sod on your lawn and check for grubs underneath. A few grubs may be okay, but if you see more than 10 in a small space, it’s time to take measures to control them. There are several ways to prevent and treat this invasive pest, biologically, organically and chemically. It is important to first understand the life cycle of the beetle.

Japanese Beetles emerge around July 4th, every year, to mate and lay eggs. Once the eggs hatch, they become infant grubs who eat voraciously from July to October. In the winter, the grubs stop eating and move deeper into the soil. As the ground warms in the spring, the grubs emerge to the surface of the soil and turn into adult beetles. It is best to control them during the months when they are avidly feeding as grubs. A traditional treatment is Bayer Season Long Grub Control for Turf. It kills grubs all season and can be applied once anytime--spring through late summer, when the grubs are most active.

It is always best to take preventative measures to stop a pest from taking hold in the first place. In the case of the Japanese beetle, it can be difficult to do much, until you recognize the signs of its presence. Proper lawn care will prevent Japanese beetle grubs from infesting and maturing. This involves the removal of extra thatch and perhaps letting the lawn dry out in the warmer months, to make the environment inhospitable. Removing the damaged grass and killing the grubs found underneath can be another method of control. Just reseed that area in the fall.

For Grubs: Inoculate your lawn with organic Milky Spore Granular Grub Control. It is available in powder form and sprinkled on top of the grass. Many insecticides may also be effective in grub control on rose bushes.
-Bayer Grub Control and Bonide Grub Killer are two insecticides that have been proven to be successful.

For Japanese Beetles: Adult beetles can be killed by applying Bonide Japanese Beetle Killer, a topical spray that kills quickly and also prevents their return for eight weeks. For edible plants and a small number of roses.
-If only a few beetles are present, hand-picking is recommended. Just drop them into a cup of soapy water and dispose of them.

The Japanese beetle can invade and destroy a lawn and a rose garden. But, with active prevention and treatment, they can be controlled.