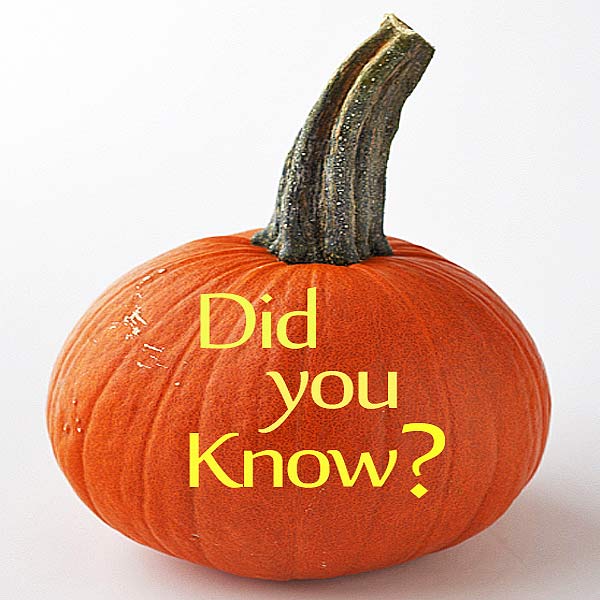 Lots to know about pumpkins...

IS a PUMPKIN a FRUIT or VEGETABLE?
Pumpkins are members of the gourd family and are technically classified as fruits because they contain seeds.

ARE PUMPKINS GOOD for YOU?
They are extremely nutritious fruits that contain many key minerals such as protein, zinc magnesium, copper. They are also high in vitamin C and contain a good source of fiber.
You are encouraged to have that extra slice of pie this Thanksgiving!

PUMPKINS ARE MADE from 80-90% WATER.
The high water content means that pumpkin is low in calories as well as being very nutritious.

WHY is a PUMPKIN'S 'FLESH' ORANGE?
Beta-carotene gives pumpkins their orange color and it's also an antioxidant. Beta-carotene is essential for healthy skin, eyes and also strengthens the immune system.

WHERE do PUMPKINS GROW?
They are grown on every continent except for the icy tundra of Antartica.

The FIRST JACK-O-LANTERNS?
When Irish immigrants first arrived in America, they brought turnips and large beets to ward off evil spirits. When they found pumpkins growing here, they used them instead because pumpkins were easier to carve than turnips or beets.

PUMPKINS BY THE NUMBERS

• 1.5 BILLION pumpkins are grown each year. Illinois, Indiana, Ohio, Pennsylvania and California are the top pumpkin producing states. That's a lot of pies!

• 80% of pumpkins must be available in October.

• 800 MILLION pumpkins must be picked in a single month.

• 500 seeds are in the average pumpkin... depending on size and variety. The roasted seeds are tasty and high in iron. Actually, every part of the plant is edible: skin, leaves, flowers, pulp, seeds and even the stem.

• 13%... Americans still choose apple pie as their favorite pie, but pumpkin pie comes in second at 13% of pie lovers.

• Pie Pumpkin: Small and sweet. This is the 'go to' pumpkin for pie baking.

•'Rouge Vif D'Etampes' or Cinderella pumpkin: You can't miss this vibrant, red-orange French heirloom in the pumpkin patch. It first appeared in Paris markets during the 1880's and is known as the 'Cinderella' pumpkin because of its resemblance to her magical carriage. This popular pumpkin has a squat shape that is perfect for stacking between the blue-gray 'Jarrahdale' and the white 'Boo' pumpkins. If cooked, the flesh is tasty in pies or just baked in the oven with plenty of butter.

• Lumina: This white pumpkin is mid-sized with a white- to cream-colored skin. Because of its classic round shape, it is one of the more popular varieties. These white pumpkins glow with ghostly splendor at dusk.

• Jarrahdale: The eerie, slate-blue rind and deeply ridged skin are the perfect complement to the orange or white pumpkins that gather on porches and stairways in October. When carved, it's a surprise to see the bright orange flesh hiding under the mysterious, gray skin. The finely textured, sweet fruit makes tasty pies, soups and stews. The average Jarrahdale pumpkin weighs from 12 to 18 lbs.