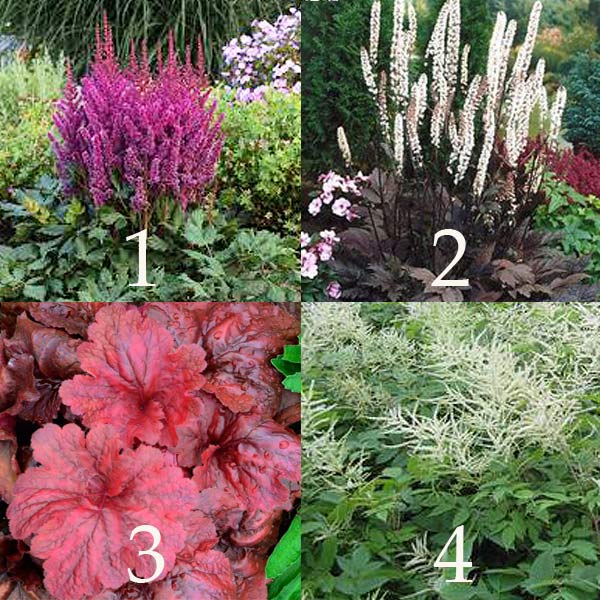 Looking for more blooming color in a shady garden?

Usually, flowers don’t bloom as abundantly in the shade as in the sun, but these well-chosen shade perennials will fill your garden with more color from mid-spring through early fall.

'Visions' is a compact cultivar which features a mound of bronze-green foliage and thick panicles of frosted, raspberry flowers.

Soil/Water: Keep soil evenly moist in half sun, half shade or full shade. It’s more drought tolerant than other Astilbes and the last to bloom.

'Visions in Pink' is a compact cultivar which features a mound of blue-green foliage and thick panicles of frosted pink flowers that are scented.

Soil/Water: Keep soil evenly moist in partial shade to shade.  It is somewhat drought resistant and small enough to place in front of a shady border.

FYI: Use in perennial borders, containers and in mass planting in very wet areas and woodland gardens. Deer & rabbit resistant.

'Visions in Red' has fragrant magenta-purple flowers with reddish stems. In spring, the foliage has a bronze-red tint to it.

FYI: Use in perennial borders, containers and in mass planting in very wet areas and woodland gardens. Deer and rabbit resistant.

'Vision in White' has dark-green glossy foliage with large creamy-white plumes. It is more drought and humidity tolerant than many varieties.

FYI: Use in containers, groupings or in a woodland borders. Deer and rabbit resistant.

A long-lived woodland plant that matures into an upright perennial with serrated, dark-purple/black foliage and elegant white flowers.

FYI: It’s a host plant and nectar source for butterflies.

FYI: Attracts butterflies and is bee-friendly and is a standout in the shady border, woodland or cottage garden.

Huechera is a clump-forming perennial that is mainly prized for its showy foliage. This plant requires little maintenance and performs best in part or full shade. It prefers rich, well-drained soil with medium moisture but will thrive in dry shade, after becoming established. Most Huechera have a low, mounding habit and are best planted as a groundcover, in perennial borders and containers or in rock or woodland gardens. Flowers attract butterflies and hummingbirds.

Huechera ‘Fire Alarm’: (pictured)  The foliage of ‘Fire Alarm’ is super-bright red in spring and fall,  darkening to a brown-red during the summer. The thick, leather-like leaves will mature into medium-sized mounds. Grows to 9” tall; 13” tall with white flowers.

Huechera ‘Electric Lime’’: Lime-colored foliage forms a large mound with stems of white flowers in May and June. Matures to 12” tall; 16” tall with flowers. Red veining in leaves appears in cooler temperatures. Heat and humidity tolerant.

Huechera ‘Citronelle’: A robust and compact Huechera with showy, chartreuse leaves with silver undersides. This color really glows in the shade. 10-12” tall and taller when in bloom.

Huechera ‘Sweet Tea’: Scalloped foliage in warm, tea-colored tones of orange, apricot and rose with dark veining. The larger leaves have colors that darken in summer and lighten up in the fall. A spray of white flowers appears in late spring. 20” tall; 27” tall with flowers. Attracts hummingbirds.

Huechera ‘Grape Expectations’: The vibrant, purple foliage is thicker, durable and a bit fuzzy. It has a more upright habit rather than spreading widthwise. As the temperatures rise in summer, the leaves develop a light silver coating but will turn back to deep purple in the fall. Tall, white & airy flowers bloom on purple stems in midsummer. 12” tall; 34” with flowers. Attracts butterflies, hummingbirds and is bee-friendly. Withstands heat and humidity.

Water: Prefers a moist soil in a light shade environment. Give a ‘woodsy’ appearance to the perennial garden.

FYI: Butterflies such as the American Copper are attracted to the nectar of the Goat's Beard flowers and is also the only known host plant for the Dusky Azure butterfly. Many bees, beneficial insects and hummingbirds are also drawn to the flowers.