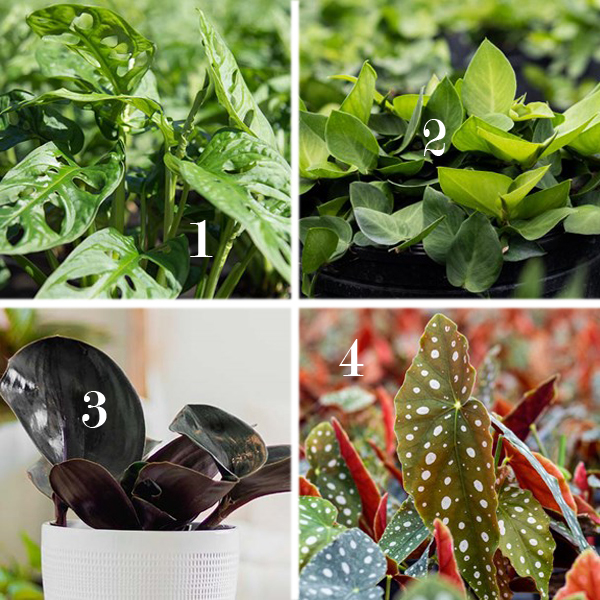 Hand selected by a team of plant hunters, this collection of super-unique houseplants hails from locations around the world--South America, Africa, Asia and Europe. Costa Farms sources their plants from breeders and plant collectors who are as excited about these new discoveries as we are. All plants are collected ethically and never taken from the wild. Supplies are limited.

1. Little Swiss Monstera (Monstera adansonii): Little Swiss is a striking and trendy houseplant that features arrow-shaped leaves with dramatic holes along the veins. These holes give it another name... Swiss Cheese plant. Much smaller than its cousin, Monstera deliciosa, Little Swiss is a medium-to fast-growing vine. When young, it is a welcome addition to desks and tabletops. As it gets older and climbs more, a structure on which it can grow up is helpful. In a warm bright spot, the leaves can get considerably larger (up to 24-inches long) with age.

2. The Shingle Plant (Rhaphidophora hayi): Shingle plant earned its common name because of the way it climbs. As it grows, it produces aerial roots along its stem that secure it to a vertical surface. Its foliage tends to grow flat against the support, giving the effect of lush green roof shingles. As a climbing houseplant, Shingle plant grows and looks best with a porous support on which to ascend. It’s relatively slow growing, but can get several feet tall indoors. Eventually, with good care, it can becomes a striking floor plant.

3. Geo (Geogenanthus ciliatus): Geogenanthus ciliatus, aka Geo, is a relatively new houseplant for North American plant parents, having been previously only available to plant collectors. Distinctive and elegant, it features large and shiny purple-black leaves that stand out against other houseplants. When young, it's a striking plant for tabletops or large terrariums. As it matures, the leaves can grow 8-inches long or more, creating quite a show!

4. Polka Dot Begonia (Begonia maculata): Polka dot begonia is a stunning and popular houseplant that can add style and drama to most indoor spaces. It features bronze-green, wing-shaped leaves with dramatic, rusty-red undersides. Its common name stems from the polka dot patterning on the tops of the leaves.

Design Tip of the Day: Combine two structurally different houseplants in a container for a stylish look.