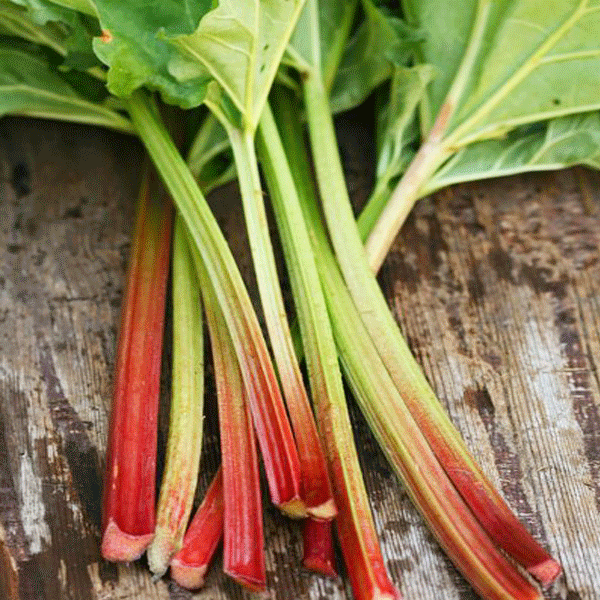 Rhubarb (Rheum rhabarbarum) is a beautiful and low maintenance perennial with large ruffled, green leaves on top of red stalks. Only the red stalks are edible and appreciated for their tart flavor in jams, pies and sauces. Once established, rhubarb plants won’t need much tending... producing stalks for decades with minimal care.

• Where should I plant Rhubarb?

This plant does best in a location that receives at least six hours of sunlight per day. The plant grows best when temperatures are above freezing but below 75 degrees… early spring to early summer.

Water when rhubarb plant begins to grow in spring. Provide one to two inches of water every week during its growing season. Add a 2-3 inch layer of mulch to keep the soil’s moisture consistent.

• Should I fertilize the plant?

Yes. Like most perennials, rhubarb does best with an annual dose of plant food to replenish nutrients in the soil. (Do not fertilize the plant the first year.) Use 1 cup of 10-10-10 fertilizer each spring when plant start to grow again. Sprinkle fertilizer around the base of the rhubarb, keeping at least 6 inches away from the stems. Water thoroughly so that it soaks into the soil.

• When can I harvest the stalks?

Allow the new plant to make roots and grow sizable leaves and stalks for 3 years before cutting any of the red stalks.

• What problems should I look for on my rhubarb plant?

Insects usually stay away from rhubarb, but watch out for fungal problems or root rot. To avoid this, provide good air circulation when planting by including plenty of space around it. Also, to avoid fungal blight, don't water from overhead. Remove stalks or leaves that develop any fungal blight. To keep rhubarb from developing root rot, plant in a well draining soil.

• Is the rhubarb plant poisonous?

All part of the rhubarb plant are poisonous, EXCEPT for the edible red stalks. Take care to plant it away from children or pets.